Reminder for the HSG Trash Pickup!

What does it mean to be a secular humanist? Is it just a euphemism for atheist, or does it mean something different? While most secular humanists do also identify as atheists, there may be a subtle difference in terms, whether by the technical definitions or by their connotations. The word humanism, in its current sense, was first used in mid 18th century France and roughly meant “A general love of humanity.” Today, the American Humanist Association defines humanism as […] a progressive philosophy of life that, without theism and other supernatural beliefs, affirms our ability and responsibility to lead ethical lives of personal fulfillment that aspire to the greater good of humanity. Does that mean that a humanist cannot have theism and supernatural beliefs, or does it mean that a humanist just doesn’t use supernatural beliefs to guide his/her ethical life? Now, the word “secular” is a little less vague. It means, roughly, separate from religion, or only pertaining to worldly things. Another word that we hear often when talking about atheism, humanism, etc., is agnosticism. Agnosticism is the belief that supernatural claims cannot be proven or disproven with the current set of data (or potentially at all, ever). By that definition that would certainly make most Christians agnostic (it is all about faith, right?) and it certainly makes atheists agnostic. We cannot truly claim to know God does not exist, can we? Colloquially, agnosticism is used to suggest one’s own doubt about whether or not a claim is true. However, the most important definition of a word comes from how people actually use it. How do you identify yourself? What do these words mean to you when you hear them? Is “secular humanism” a redundant term, or can there be religious humanism?
Posted by Humanist Society of Gainesville at 8:05 AM 6 comments:

An Afternoon with Humanists

In May of 2011, the Humanist Society of Gainesville gathered the day Harold Camping’s predicted rapture.  We decided that if we were going to be left behind, we might as well enjoy ourselves! Alas, Harold Camping’s calculations were off… but that just gave us more time to enjoy a second party.  On Sunday, May 20th, our members and friends met for a picnic at Boulware Springs Park. 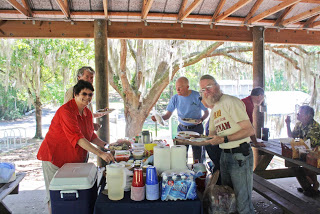 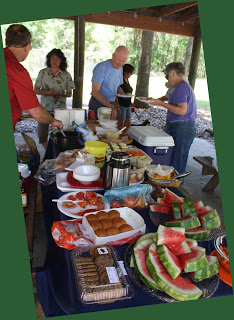 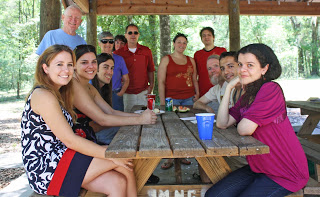 We shared great weather, delicious food, and excellent company and conversation.  Thanks to all of the participants who came out to enjoy the day with us, and special thanks to our event photographer, Brigitta!
Posted by Humanist Society of Gainesville at 6:40 PM No comments:

“Thursday, May 3, is the National Day of Reason and a time when we can all celebrate the way of thinking that is responsible for our modern day understanding of reality.  We humans are more and more beginning to appreciate the fact that reason and its natural offspring, rationality and science, are by far the best ways to understand ourselves, our world, and the universe around us.  This pathway to knowledge is totally responsible for the major leaps forward mankind has experienced in the last several hundred years.  No longer are our lives governed by superstition and magic.  We understand the actual causes of things such as disease, mental illness, and weather. And we can be sure of this because of one simple observable fact, reason works.  Let us pause to remember on this day the great advances that have come our way since we began following the path of reason.”

Although the National Day of Reason has come and gone, we’d like to hear your thoughts.  What great advances through reason have inspired you?
Posted by Humanist Society of Gainesville at 5:34 PM No comments:

One of the goals of the Humanist Society of Gainesville is to “foster a positive image in the community by participating and/or sponsoring public service events and other outreach activities.”  Two major service projects that we have engaged in as a group are our Adopt-A-Highway program and our on-going food drive in support of the Food4Kids Backpack Program.  In spite of the success that we have had with both of these programs, as Humanists, we think that we can help our community even more.  Our next proposed project is to host a community blood drive.  Gainesville is home to two major hospitals, Shands and the North Florida Regional Medical Center, both of which provide care to patients potentially in need of blood transfusions.  A recent article in the Gainesville Sun discussed the decrease in blood donations for the city each summer, as students from the University of Florida head home between semesters.  Blood donors are needed year round, and now is the prime time to help meet the needs of our community members. We’re looking for individuals interested in serving on our Blood Drive Committee.  Do you have a passion for helping others in your community?  Would you like to help plan, organize, promote, and execute a blood drive this summer?  Contact us at [email protected] if you would like to be involved in this worthwhile project.  Stay tuned for updates including the date, time, and location of our upcoming blood drive!
Posted by Humanist Society of Gainesville at 9:40 PM No comments:

Picnic in the Park

Join us on Sunday, May 20th for our Picnic in the Park!  We’ll be meeting at 11:30 at Boulware Springs Park, located at 3300 SE 15th Street. If you can, please consider bringing one of the following items to share: 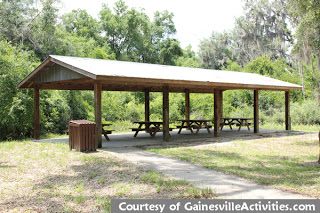 From Williston or Waldo Road, head east on SE 11th Avenue, on the south side of Lincoln Middle School.  From there, head south on SE 15th Street, and Boulware Springs will be on your right. 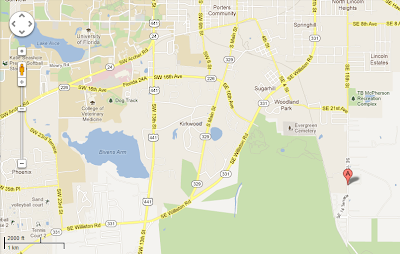 This is a great opportunity to enjoy the great outdoors and relax a while with fellow humanists!  If you have any questions, please contact [email protected] for more information.  See you there!
Posted by Humanist Society of Gainesville at 8:05 PM 1 comment:

The Humanist Society of Gainesville participated in the Hippodrome’s Community Voices event on April 23.  We had a table at the event and well over 100 people had a chance to see what we are about.  We had a number of people sign up to be on our email list and the poster that Brandi designed for us was impressive.  This event consists of dramatic readings by Hippodrome actors or students followed by everyone gathering for snacks in an area where tables for the participating organizations where set up. This event was our first try at “tabling” and we used this as an opportunity to learn how to be more effective in this type of setting.  Our members who participated directly in this event included Brigitta Cuadros, Brandi P., Ginger Andrews, Pierce Butler, and Jim Sullivan. The Hippodrome plans for this to be an annual affair and we look forward to participating again next year.
Posted by Humanist Society of Gainesville at 11:12 AM No comments:

Grant from the American Humanist Association

By Jim Sullivan Some time ago our now past president Susan Bergert applied for a grant from the American Humanist Association to allow us to purchase audio visual equipment and some other items.  The request was for $1,850.00.  We were awarded a $1,000.00 grant. With this grant plus a little from our treasury we have purchased and received the following audio visual equipment. An Epson Powerlite Presenter Portable Projector/DVD Player Combo (V11H335120) A Gigant Multi-Purpose Projection Stand An 84 inch Picture King 50 X 67 Matte White 4:3 Video Tripod Screen With this equipment we will be able to play DVD’s, project computer images, and/or make powerpoint presentations at our meetings. We are very thankful to the American Humanist Association of which we are one chapter for this generous grant and look forward to using this equipment.
Posted by Humanist Society of Gainesville at 8:21 PM No comments: