Welcome to the new website for the Humanist Society of Gainesville!  You will notice that the majority of this website is similar to our original website, with the exception of some added features.  We hope that you find this website useful and enjoy the new capabilities, and we look forward to frequently updating you on important news and issues in humanism, both locally and nationally. If you have any questions, comments, or concerns, please email us at [email protected]
Posted by Humanist Society of Gainesville at 8:58 PM No comments:

The Religious Right’s Assault on Secular Education is Nothing New

Dateline January 16, 2012
University of Florida graduate student Matt Mingus gave a somewhat chilling lesson in American history when he spoke at the January 11 meeting of the Gainesville Humanist Society. The fight for religion-free schools is not a relatively new phenomenon, but was raging even in the mid-19th Century. 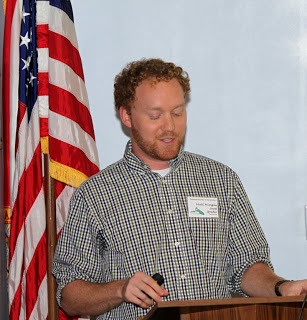 Matt pointed out that after the Civil War, more and more immigrants streamed into our country and became good loyal citizens. Because they brought a diversity of religious beliefs, school systems could no longer accommodate the dominant Christian protestant religion in the school curriculum and activities. Fundamentalist sects reacted strongly. When the Cincinnati public schools decided in 1869 to ban Bibles, prayer and hymns from its schools, fundamentalists took their case all the way to the state supreme court. There the school board’s lawyer, JB Stallo, argued that government could only support religion by guarding the “freedom” of its development, and that anything more would be “tyranny and oppression.”  Stallo argued that the US “at least ought to be, not a Christian, but a free people.” The school district won the case and the secularization of schools continued, ensuring that science and history be taught by empirical methods and objective facts, and not through the distorted and limiting view of religious dogma.
As today’s fundamentalists wage their battle to “take back” the schools, proponents of secular education continue to face the challenge of fending off new and well-financed attacks.  “The price of freedom,” Matt reminded to audience, “is eternal vigilance.”
Matt’s presentation, aptly called “Not a Christian, but a Free People,” grew out of his essay, “Rejecting ‘His Story.'” The essay won second place in a national contest sponsored by the Freedom from Religion Foundation. In the essay, Matt discusses the current efforts of the religious right to rewrite history in order to make the US a “Christian nation.”
Matt is currently working on his PhD in European History, and teaches undergrads at UF.
Posted by Humanist Society of Gainesville at 8:49 PM No comments:

Each of Us is Stardust: On Being “Post-theological”

By Susan Bergert
Dave Niose, president of the Washington-based American Humanist Association, has brought an interesting insight into Humanism that we all can draw upon in our attempts to explain our life stance to others.  We quote here part of his blog of February 26, 2011.
“The post-theological individual is not deprived of the positive benefits that were derived from theology. From a naturalistic, post-theological standpoint, there is lots of room for awe, wonder, and profound thinking. As Carl Sagan said, each of us is stardust, so humans can be seen as a way that the universe observes itself. Little wonder that most humanists see Sagan as having more profundity and veracity than any biblical prophet.
“And from this naturalistic, humanistic standpoint, there is plenty of room for a life of purpose and doing good. In fact, since this one life is our only certainty, the need to live in such a way is more compelling, certainly a better motivator than fear of eternal punishment from an angry mythological God.
“With the need for theological explanations of the natural world eliminated, many good, ethical people simply see theology itself as unnecessary. Defenders of theology will play the morality card, suggesting that without supernatural beliefs we will become immoral. But alas, observations of the natural world have demonstrated that the inclination to live by rules and standards is common in social animals, including humans. Our capacity for morality is innate. Of course, our capacity for immoral behavior is well documented as well (even in the most religious of societies), so it’s important that we create a social structure that encourages ethical behavior and the positive aspects of humanity.
“Because religious institutions are so ingrained in our culture, they of course still offer social benefits to many. A church, mosque, or synagogue can be a place for community and charity, a place for ceremonies like weddings and funerals. To many, religious institutions offer tradition, cultural continuity, and perhaps a place to find peace of mind through ritual, meditation, and contemplation.
“But more than ever, many now achieve these ends without institutions or beliefs grounded in supernatural theology, by instead utilizing humanist organizations, secular institutions, or other means to fill such needs. These people find peace, mindfulness, goodwill, community, ethics, perspective, and culture without the assistance of theology or religious institutions. These people are post-theological, and many of them are humanists.”
For the complete article see http://www.psychologytoday.com/blog/our-humanity-naturally/201102/being-post-theological
Posted by Humanist Society of Gainesville at 8:41 PM No comments: