Childhood experiences taught me early on that there is no god.  I tested the limits of the Catholic religion that I was born into and as a result grew up fearless of the dark, of things that go bump in the night and of imaginary beings.  Santa Claus was the easiest when I pulled his beard to reveal the face of a neighbor.  I learned catechism and attended church as required. There was no body of Christ and I didn't go to hell after spitting the tasteless wafer into my hand.  There was a simple joy of learning for learning sake.

My attempt at learning about other religions was misconstrued as a search for god.  It was important to understand what religion is and how it works. Once understood, it loses it’s effectiveness.  My intent was to deal with the unrelenting religious propaganda and faith based, circular and irrational arguments that would label me an outcast.  My lack of faith turned into it’s own irrational belief that threatened to cost social ability, connection and autonomy.  Observation taught me that my atheism would cost me my career.   When I questioned my ‘born again’ brother about his beliefs he chose to end our relationship.  Another desperate family member lectured me about god, trying to save me from the pain of eternal hell fire.  In my growing circle of atheist friends, none dared to express their views on religion openly.  All marked their religion ‘box’ as ‘other’.

In my opinion, the faithful and atheists have one thing in common.  We are all held down by the relentless propaganda system of organized religion and their constant re-enforcement to prevent us from pursuing our own interests instead of the self serving illusion of the church.  The religious must be told every day what the story is – the value of religion or they will turn to seeking an alternative to becoming more human, compassionate and connected to a concern for others and the planet.  Religion is based on a belief that we are relatively powerless. Churches freely exploit the freedom of speech for their own ends and very consciously and professionally manipulate people away from critical  thinking by controlling the perception of reality.

Like the comfort of returning to a prison cell, some return to the old time fables when facing their mortality because stepping into the beautiful light of reality is in conflict of deep, unresolved childhood fears of the boogie man, that were put in place to serve as the scaffolding for believing the unbelievable. It takes courage to step into the light.  But the rich reward of freedom, knowledge and fearlessness may be similar to being born again.  This time, without original sin.
You are not alone.  We are leaving a light on for you. 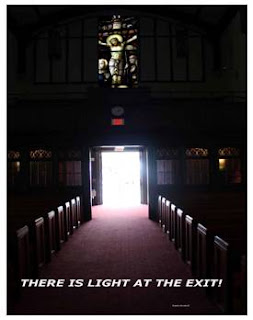 Posted by Humanist Society of Gainesville at 5:18 PM 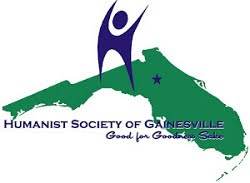